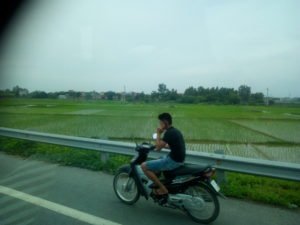 ..or structure and drywall, harsh reality and opulence.

Green hills and clouds reflect themselves on the water mirrors of the paddies. As far as the eye can see, they stretch on the sides of the street that links Hanoi to the other cities of the North of Vietnam. Fields are dotted light poles that come one after another at regular intervals and cone-shaped hats of bowed farmers intent on reaching rice plants with their leg and hands immersed in the water.

The farmers work alone, sometimes in couple, and they are many, placed a bit everywhere with no ruling logic apparently, in rectangles of paddy that are far one from another.

Farmers and rice plants on the sides, banners from the Party, shops with smartphones and coca cola along the street: everything in the same place.

The amount of tourist and the way they are managed are emblematic of the new spring that this country is now living. Hordes of foreigners in groups led by tour guides with small flags invade the station from where boats for Halong bay tours leave. Between them, us. 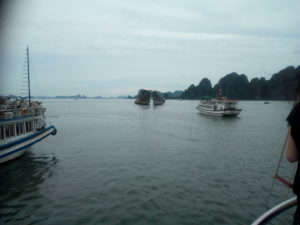 The place is beautiful: hundreds of green islands with peaks on the see make unique the panorama we see from the boat. However, the real beauty come when we arrive at the fishermen’s village. Everything is set on detail: boats leave tourists in a floating station, here visitors get on typical small rowboats driven by local people or on kayak led by tourist themselves in couples. We go for kayaks, and after some starting hardships we are able to reach the entrance of a small and low cave that links the sea with a small bay enclosed between green mountains.

The place is very enchanting and seems to invite you to stay there and relax or read, with no more oar strokes. Lay on your kayak and listen to the sound of silence of a place that leave out the world. 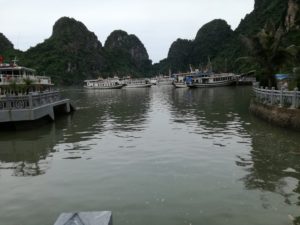 It seems to talk to you in this way. Just seems, in fact all the bay is populated by tourists with orange safety jackets, more or less astonished by what is around them. The direct consequence of this density of people in the small bay is that world came in too, and beside the purity of the surrounding green hills, there is the dirtiness of the water. Moreover, the time to accept the invitation to relax is not given: the tour guides require a maximum of 30 minutes of stop in the village, in order to let other tourist come. 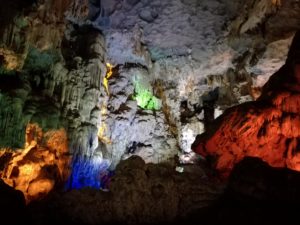 Therefore, we go back on our boat and we move to another part of the bay. They take us to a beautiful grotto. Still, unfortunately, the exploit of tourism ruins the place: the cave is filled at the maximum of its capacity with visitors pushed up on the hill of the island and led to the entry of the cave. Everything here is fake and done on purpose for visitors’ short stop: from the handrail made of fake wood to the colored lights used for creating lighting effects with stalagmites, here rock shapes have been modified with the aim of making figures or artificial fountains with water loaded by a noisy pump.

This is Vietnam too, together with the beer that I will pay less than 2 euro and the Piaggio motorcycle that I have in front of me in the pub where I am while writing these lines. Vietnam is a boom, in each of its aspects: demography, economy, beauty.

It is a boom: spectacle and destruction.

from Venice, Italy.. but currently in Rayong, Thailand

Inflation has not been a concern for quite a while. Still, 2021 has been the year of economic recovery after the pandemic. Is it coming back? END_OF_DOCUMENT_TOKEN_TO_BE_REPLACED

The Homeland of Itzurza is a novel exploring the journey of four women stuck between the past and the future in post-Franco Spain. END_OF_DOCUMENT_TOKEN_TO_BE_REPLACED