Third day in Vietnam, another guided tour. Despite the tour we are going to attend it is a planned touristic visit, Vietnam can surprise you in ways you do not expect, as for instance in our guide.

This good smiling easy going guy make the foreigners call him Kimi and his figure looks more like a comedian than a tour guide, although he is very well prepared. 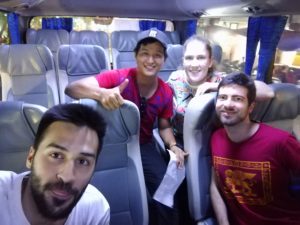 Kimi laughs and jokes with himself too, he knows the sympathy and tenderness that his figure summons on his audience and maybe it is for this reason that he feels like telling us about his dream to become an airplane pilot, and to demonstrate it he shows us a picture of him dressed with the uniform.

Once upon a time there was the communist Vietnam. At the time he was studying the Vietnamese government used to financially support education, and so Kimi reached and overcame exams and interviews to go to Australia and do trainings and the mandatory hours of flight and eventually officially become a pilot.

Everything was ready, but then government changed its mind turning into a wide spread private school education system and asked for a very high fee to get the license: a prohibitive amount for any Vietnamese, therefore Kimi had to give up his dream. 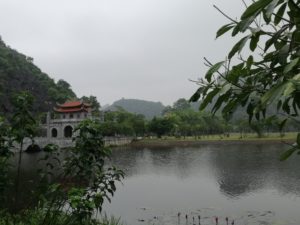 Once we get to Ho Lua, we have a visit into pagodas with Chinese ideograms. They are dedicated to the kings of an ancient Vietnamese dynasty, inside the temples are offerings at the foot of the statues consisting in coca-cola and Hanoi beer cans.

After a brief tour in the vowing pagodas we go to Tam Coc, a village where nature is untouched. Here, inhabitants lead tourists on the river on small boats made of metal sheets in groups of three per boat. 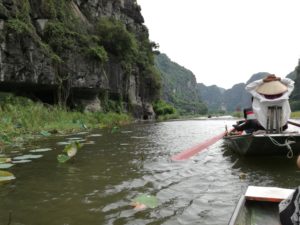 Not even the great amount of tourist can degrade the magnificence of this place. Silence win everyone and everything you can hear is the rhythmic and soft sound of the oar immersing in the water. All around us are waterlilies laying on the surface of the water that reflects the light blue sky and the green surrounding peaks.

Once back in the village, among local people, tourism is still perceived as something new and no one has anything to claim when we enter in the slum of the local population that is mainly composed by farmers. Welcoming us there are only barefoot children wearing western football club jerseys, their mothers and grandmothers smiling at us and some cocks here and there moving between the ever-present motorcycles. 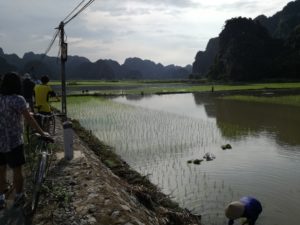 We move on the paddies, a woman with his cone-shaped hat is sowing rice plants in neat rows with her naked hands in the water without caring about our presence. On the other side of the streets buffalos walk disorderly, in the middle motorcycles pass by with smiling boys on greeting us, happy and proud for talking with foreigners, shouting a “hello” full of joy and life for it is maybe the only English word they know.

All around paddies and green mountains.

Vietnam is a nice place.

from Venice, Italy, but currently in Rayong, Thailand

Inflation has not been a concern for quite a while. Still, 2021 has been the year of economic recovery after the pandemic. Is it coming back? END_OF_DOCUMENT_TOKEN_TO_BE_REPLACED

The Homeland of Itzurza is a novel exploring the journey of four women stuck between the past and the future in post-Franco Spain. END_OF_DOCUMENT_TOKEN_TO_BE_REPLACED