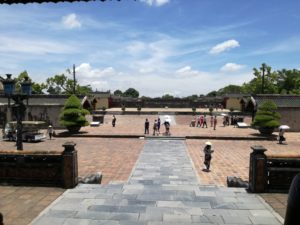 To fly is not for everyone. On Vietnam Airlines flight from Hanoi to Hue we board on in the early morning we are those dressed worse. From the capital city in the North we are moving to the central part of Vietnam Once landed, taxi drivers have to fight for making us get on their car and take us to the city center, at the Imperial city. The winner is the first who succeeds on taking our suitcases and load them on the back of the car. He had to fight with the others, but he finally gained our 8 euro, yeah.

The Imperial city, former capital city of The Empire, has remarkable views. As remarkable is he number of offices at the ticket office. I had to interact with tree people for getting our tickets: one for asking, one for paying and get them, one for the change. 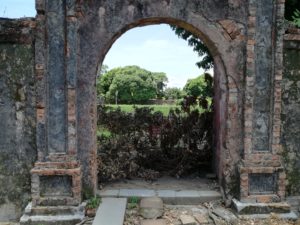 After a tour of the imperial city, we look for a transport to Hoi An. A taxi driver tells us that his brother can take us there for 1’500’000 Dong, around 0 euro for 160 Km. We try negotiating but the price does not go down. In the end, when we accept his price (actually really honest) his and his colleagues faces light up.

I ask if there is a cash machine in the nearby they tell me that there is not and immediately, despite my refusal for not to disturb them, they offer to take me to the ATM with a motorcycle.

For the first time since am in South-East Asia they give me a helmet (in Thailand it is not that common, and motorcycles are often considered a means of transport for 3 or more persons). After having seen it from outside, I try the experience of living Vietnamese motorcycle traffic jam firsthand.

The ruling logic seems now to be easy: one can drive everywhere, what is important is just honking to communicate the point of the street where you are.

We stop at a crossroad, the traffic light is red, in front of us an array of motorcycles, seems the prelude to a battle but when the traffic light turns green , the output is a perfect shape sorter with no crash.

Once back at the taxi station, the taxi drivers telling my friend about Vietnam War: Hue has been heavily damaged by the war. Hue was involved in one of the crucial battle of the Tet offensive, in 1968. During this military action started on Tet day of 1968 (the Vietnamese New Year Eve), 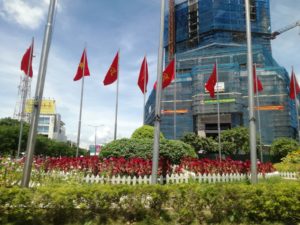 North-Vietnamese initially conquered the city, but then American counter-attack led to tremendous fight with heavy losses among civilians. It is in that occasion that the father of our taxi driver died. At that time, this man we are talking with was a baby of just 5 months, he has never known his father.

We would stay here with him and listen to his stories for hours, but our taxi has finally arrived and we have to go.

Out of the window wonderful panorama alternate to Party banners on every light pole. The tropical storm that seizes us just a bit before Hoi An can ruin our divers’ mood: we made his day with the money he is earning with this journey, considering the low cost of life of Vietnam.

Once we get to Hai An, at our hotel there is a surprise waiting for us.  The name of this surprise is Mimi, she is twelve years old and short black hair. This little girl has a strong personality and speak English better than us. Since the start, she makes it clear who is the leader by welcoming us with a “What do you want?”

Her parents speak very few English, and who is actually managing all the operations is Mimi. We have a delicious dinner, and she stays with us showing videos on youtube, games on google and joking us one by one.

This place keeps on amazing me: sickles-and-hammers, north-Vietnamese flags and Ho-Chi-Minh quotations at the corner of every street, a taxi-driver who has never known his father died under American bombs and still, everyone speaks English, especially young boys and girls, they have American dreams.

Who did win the war?

from Venice, Italy ..but currently in Rayong, Thailand

Inflation has not been a concern for quite a while. Still, 2021 has been the year of economic recovery after the pandemic. Is it coming back? END_OF_DOCUMENT_TOKEN_TO_BE_REPLACED

The Homeland of Itzurza is a novel exploring the journey of four women stuck between the past and the future in post-Franco Spain. END_OF_DOCUMENT_TOKEN_TO_BE_REPLACED