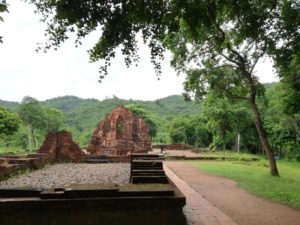 We woke up early in the morning to go to see the sunrise up on the hills in My Son, where there are groups of ancient temples. Although up on the hills, the war got here too: bullets are still visible on the ruins of temples and statues, bombs have destroyed groups of sacred buildings and left deep craters now covered by vegetation that completely dresses these hills. The streams running through them used to provide the water that was being drunk during religious rituals: today that water still has chemical agents due to the bombs dropped by Americans. 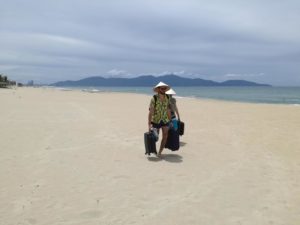 Once back to Hoi An, we take a taxi to Da Nang, touristic city with a nice beach where fishermen’s  wooden boats alternate themselves with luxury resorts. The city is living a time of fast development in terms of touristic volume with resorts and condominiums growing up on the seaside (yes, by saying “seaside” I mean exactly that: the distance between their cement and the water is often lower 30m. Ain’t no good).

One of these projects is the Cocobay, a 14-billions Dong investment (around 530 million euro) advertised everywhere, also in airports and on the screens of airplane seats, and its testimonial, and first official tenant Cristiano Ronaldo. 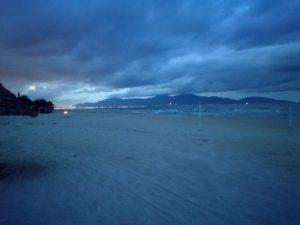 We cannot help us stopping when we see coconut-leaves-covered huts and deckchairs. For just 4 euros we can use huts, deckchairs, towels, swimming pools and showers.

We fall on the deckchairs, lulled by the sound of the waves. We get up only for having lunch. The condition of wallets lead us to have lunch in one of the restaurant out of the resort. We get to eat in a bar with a metal sheet as ceiling, here a man get into the bar riding his motorcycle between tables to eventually deliver something to the owner of the place.

We go back to sleep on the beach, the only thing that can take us away from there is the plane we have to take to get Ho Chi Minh City, also known as Saigon.

We have a shower and we go. We leave there in the beach western families playing table tennis, the voice of a piano man singing 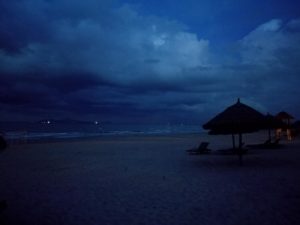 commercial song in one of the restaurant of the resort and Japanese girls sipping cocktail while sitting in the swimming pool.

So strange, so strange and different world, so close one to the other.

from Venice, Italy ..but currently in Rayong, Thailand

Inflation has not been a concern for quite a while. Still, 2021 has been the year of economic recovery after the pandemic. Is it coming back? END_OF_DOCUMENT_TOKEN_TO_BE_REPLACED

The Homeland of Itzurza is a novel exploring the journey of four women stuck between the past and the future in post-Franco Spain. END_OF_DOCUMENT_TOKEN_TO_BE_REPLACED