Eibar, an alternative to modern football

Nowadays we are more and more used to a football dominated by magnates, sheiks and big enterprises who take control of clubs, historic and modest ones as well, wasting millions to sign big stars by astronomical numbers or creating overambitious infrastructures in order to develop the club.

Big banks and international companies are transforming football, which was created around 150 years ago in England as a simple game, in one of the most profitable businesses of the world. But it’s still possible to find some exceptions. Teams like Sociedad Deportiva Eibar that, even if they don’t seem to have a place in the current modern football, they exist to remind us that this sport is not based only on money.

Probably, the town of Eibar wouldn’t be a known place out of its region without football. However, the modest team that represents this small Basque city has succeeded to reach the auto denominated “best league of the world”, the Spanish “Liga”, placing Eibar in all the maps and making it known to football fans all over the world.

Placed in the province of Guipuzkoa, close to the central point between the three provincial capitals of the Autonomous Community of the Basque Country, Eibar is an industrial town with a population of less than 30.000 inhabitants. Its history has been related to the several factories and workshops that has hosted. For a very long time, the town has been an important centre of arms industry, that’s why it is known as the “gunsmith city”. The First World War represented a big peak for Eibar, but the end of the Great War was followed by a decline of its main industry. However, thanks to diversification of production the town could prosper again; the fabrication of sewing machines (Alfa), Bicycles (Orbea, BH) and other activities permitted the town to follow its develop, becoming an attraction pole for immigrants coming mainly from the north of Spain and growing by the hillsides of the deep and narrow valley where the city is located.

The industrial character of this town explains why it has been the cradle of several working-class movements and one of the main socialist heartlands in the Basque Country. It’s important to highlight that Eibar was one of the three Spanish townships where the II Spanish Republic was proclaimed the 13th April 1931, a day before the rest of the country, so Eibar’s town hall was the first place where the three-coloured republican flag flew.

Football appeared here during the first decade of the last century with the foundation of small clubs that used to struggle for finding stability and finally disappeared after some years. It was in 1940, once the Civil War was finished, when two small clubs decided to unite creating the Sociedad Deportiva Eibar. Inspired by the red and white colours of their neighbours from Athletic de Bilbao, this team began to compete in regional divisions. Soon they adopted their current blue and maroon colours thanks to a sports equipment cession coming from FC Barcelona. It didn’t take a long time to the club to professionalize, becoming a regular team in second and third division. At the 2013-14 season, after ascending to second division and establishing the goal of permanence at the begging of the season, the “gunsmith team” surprised everybody with an amazing second half of season that leaded the team directly to first division for the first time in history. 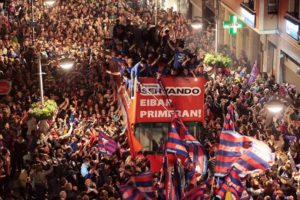 Nowadays, Eibar is on its third consecutive season at La Liga. Even if at their first year in this league the team was able to maintain the category thanks to an administrative relegation of Elche CF, during the last season they could assure the permanence without any hardship and in the current season, after 26 games, they still keep their chances of reaching the European positions.

The fact of finding a team coming from an Eibar’s size town and competing against some of the best teams in the world deserves by itself to be highlighted. However, this is not the only particularity of this Basque team.

At the 2013-14 season, in which the club was playing at second division, it was disposing a social capital of less than € 400.000, being a completely written-off team without any debt. However, the current legislation was obligating to all the clubs in professional divisions (first and second division) to posses a minimum capital of 2.1 millions of Euros. Even if the team from Guipuzkoa finished that season in the first place of the silvered division, they were asked to increase their capital in 1.7 million Euros to obey this law. Without this money the club wouldn’t have been authorised to play in the first division league and, in addition, it would have suffered and administrative relegation to 2B division, the third category in Spanish football.  That’s how an unfair law was penalizing a modest but solvent club, while it was being clement with other clubs who accumulate debts year after year.

As a consequence of this law, SD Eibar was obligated to quintuplicate its capital in order to reach the dream of playing face to face against all the Spanish big clubs like Real Madrid and Barcelona. But this capital extension was made in a special way; The main inversion was not coming from public institutions or from a big stockholder who takes the control of the club, as usually it’s done. A campaign called “Defiende al Eibar-Eibar defendatu” (Defend Eibar) was started with the aim of collecting the required money.

Since then the case of SD Eibar has become a unique case, even a teaching example that is mentioned in some business schools. The “Eibar Model” is based on the management of a sports club thinking of it like an enterprise which has to be profitable, with zero deficit politics and which prevents anyone to own more than the 5% shares of the club. A club that must grow around the city with projects like “Ipurua Tallarra”, a sports school and management centre located under the stands of the stadium. 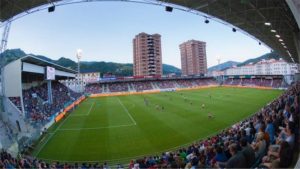 Finally the crowd-funding campaign succeeded to reach the objective thanks to contribution of more than 11.000 stockholders coming from 60 different countries around the world, reaching the required money three weeks before the deadline. Thanks to that the 24st of August 2014 Eibar has been able to have its début in the highest category of Spanish football. The small stadium of Ipurua, with capacity for less than 6.000 fans (less than the minimum demanded by LFP, Liga de Fútbol Profesional) held, for the first time in first division, a provincial derby against Real Sociedad, in which the locals obtained their first 3 points after beating 1-0 the team from Donostia.

Inflation has not been a concern for quite a while. Still, 2021 has been the year of economic recovery after the pandemic. Is it coming back? END_OF_DOCUMENT_TOKEN_TO_BE_REPLACED

The Homeland of Itzurza is a novel exploring the journey of four women stuck between the past and the future in post-Franco Spain. END_OF_DOCUMENT_TOKEN_TO_BE_REPLACED