Giro d’Italia, one hundred years of an eternal youth 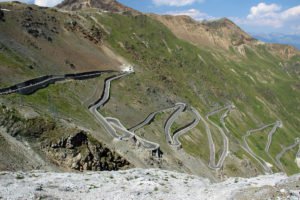 Sweet hills, impervious mountains, amazing landscapes, we observe, sliding from the seaside to the highest peaks. We watch thousand of kilometres, crossed by a trail of colored jerseys, which run through Italian peninsula for many hours a day.
Three weeks on the road providing strong emotions and spectacle.
Despite this, cycling is not the most suitable sport for the post-modern society, where immediacy rules.

Watching a 5 hours stage each day is a privilege, not always possible or desired.
Each bicycle race is full of technical complexity, strategic choices.
Teamwork, mechanical components, nutrition aspects, stress, luck and above all a big effort are crucial.

Professional cyclists are not showman o tv stars, they appear us in their authenticity. 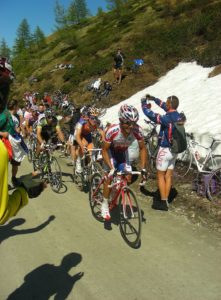 Cycling is a sport that goes really close to supporters and fans.
Sometimes you may even find the World Champion passing under your house balcony, crossing small villages, riding few meters from his supporters or asking them a bottle of water to cool off during a steep climb.

However the closeness today is not enough to reach the public attention: marketing and financial means are required to promote the sport, to involve the teenagers, normally attracted by more famous and celebrated sports. 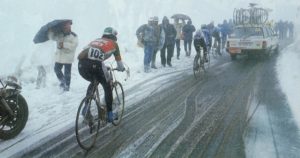 Since 1909 Giro d’Italia, which interrupted only during the World Wars, has been a various, unpredictable and vibrant show. It is an event able to adapt to time changes moving across the XX and XXI centuries, representing the truest sides of the sport, made by people fighting together.
During its history great characters of Italian journalism such as Indro Montanelli and Sergio Zavoli narrated the extraordinary deeds of the cyclists, making sport chronicles closer to literature.
Giro’s fame has derived from its participants’ depth too: Gino Bartali, known mostly for his successful career, deserves a special admiration because of his solidarity during the Second World War. In that period the Italian champion helped Jewish families to escape from deportation and death. Moving in the middle of Italy from Assisi (Umbria) to Terontola (Tuscany) and vice versa, he collected and provided them false passports and documents, which he use to brought hidden in the reed of his bike.

The organizers have always tried to draw tough stages, rich of surprises and difficulties, never forgetting to insert references to historical celebrations and particular anniversaries.
In 2002 Giro d’Italia celebrated Euro currency introduction starting in Groningen and moving across all the EU founders countries.
Furthermore, in 2006 the “Corsa Rosa” started in Belgium to remember the victims of the mines disaster in Marcinelle, 50 years before.
Also in 2011 , when the starting city was Turin, old Italian capital city, Giro celebrated 150th anniversary of Italia unification.
Instead, 100th edition in 2017 has boosted the typical inclusiveness of cycling.
The route chosen is wonderful: it started from Sardinia, then passing through Sicily reached the peninsula to cross 16 regions on 20, with 21 stages.
Epic climbs have been selected to complete the picture such as Etna, Blockhaus, Oropa, Mortirolo, Stelvio, Dolomiti and Monte Grappa. 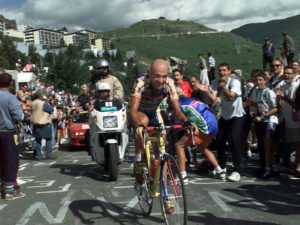 Which other event can show Italian beauty, cities and countryside like Giro d’Italia?
How may other championships match a sport competition at this level with history, tradition and local culture like it does?
It is amazing watching live performances close to the realms of human possibility, as the 5000 meters of climb in the 16th stage from Rovetta to Bormio.
During these years historical pages of the race have been the snow in Gavia pass, the terrifying hairpin turns of Stelvio, the dirt track in Colle delle Finestre, the creeps when someone fall down on the road and the following sighs of relief seeing that the situation is under control, or the anxiety when things are critical.

Giro d’Italia has evidently an economic impact too.
This year it has more than 50 sponsors, 22 networks for radio and televisions live broadcast available in 190 countries.
In Italy live broadcasts about Giro reach on average 1 million and 753 thousands people each day, with a share of 14,4%.
The race represents a unique opportunity to promote territories with an international diffusion. 26 000 overnight stays have been computed to follow the event. 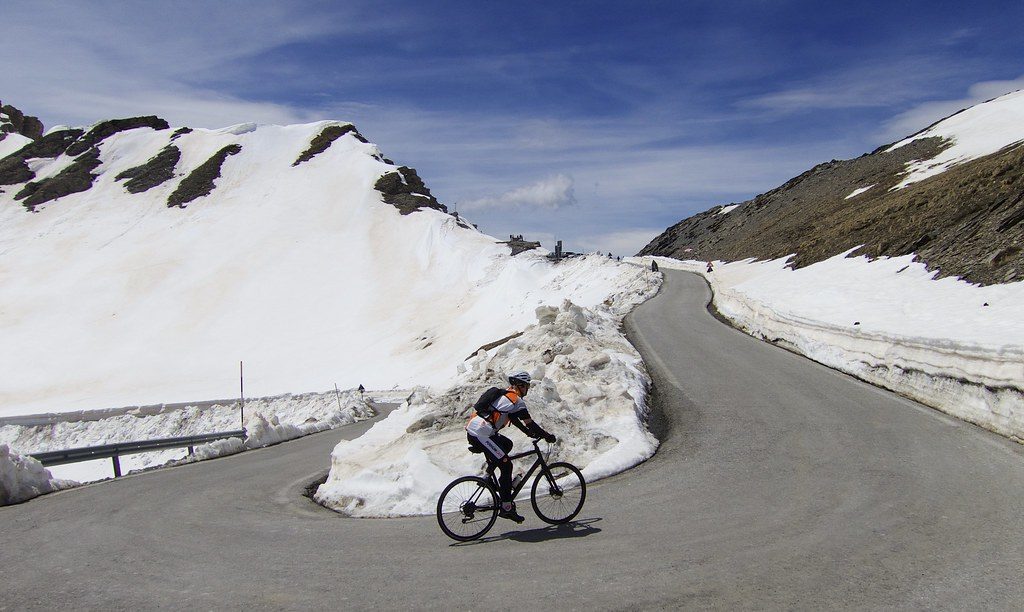 Small villages and less popular territories exploit Giro visibility to meet the world and open to new possible tourists.
Those communities often organise also collateral events and holiday discounts.
In the latter years cooperative of wine producers and enterprises have worked jointly with the organizers to build a synergic action among the brands.
For example, this year the individual time trial of Sagrantino from Foligno to Montefalco has been a successful product of the cooperation.

The attractiveness of the race depends obviously on the cyclists participants, clearly economic aspects are more than relevant.
The total prizes amount is 1.385 millions of euro, 27540 each stage with a prize for the final Maglia Rosa (the winner of the championship) equal to 200 000 euro.

Cycling has faced also hard period because of doping, especially in the recent past, but, actually, they are not completely solved.

At the beginning of Giro 2017 Ruffoni and Pirazzi, members of the team Bardiani CSF, have been disqualified. They were declared positive in an unexpected anti-doping test, made few days before the beginning of Giro d’Italia.
The persistence of this phenomenon is undoubtedly something negative.
By the way, it is necessary to highlight the rapidity of intervention reached today against these improprieties, making unexpected tests to the athletes, even far from important cycling races.
Therefore it is possible to disqualify cyclist that are using this dangerous and incorrect means before they waste the competition, making these behaviour harder than before and less frequent.
Is it a problem of cycling in particular? Do they other sports give the same attention to doping?
These questions are still unsolved, meantime cycling is improving its technics to face this plague and there have been few cases in the latest period.
The image of a sport able to change and to clean its reputation must be recognised and appreciated.

Today thinking about Michele Scarponi, Viellehner and Nicky Hayden is necessary.
In the recent weeks they have been victims of road accidents, losing their life while training on their bikes.
It is strongly urgent to protect cyclists, guaranteeing them the possibility to be safe during their activity, preventing these tragedies to happen.

Almost one year ago, during the stage at Colle dell’Agnello on May 2016, Scarponi did an amazing race on the Alps climbing, helping his teammates and showing the magical side of cycling.
His sympathy, his charisma, his abilities of great athlete and sportsman will never be forgotten.

During this Giro d’Italia the supporters’ affection and the tribute of his colleagues are giving him a deserved celebration.

Cycling is tactics, strategy, courage, perseverance, but also emotions, rivalry, friendship, passion and Italian history.
Giro is a cornerstone, which, after one hundred years, is more various and fresh than ever. Each year they innovate it, inventing new routes and giving to young athletes the chance to grow and debut on the great stage.

Inflation has not been a concern for quite a while. Still, 2021 has been the year of economic recovery after the pandemic. Is it coming back? END_OF_DOCUMENT_TOKEN_TO_BE_REPLACED

The Homeland of Itzurza is a novel exploring the journey of four women stuck between the past and the future in post-Franco Spain. END_OF_DOCUMENT_TOKEN_TO_BE_REPLACED