To leave, to come back, to emigrate – Marcinelle and today 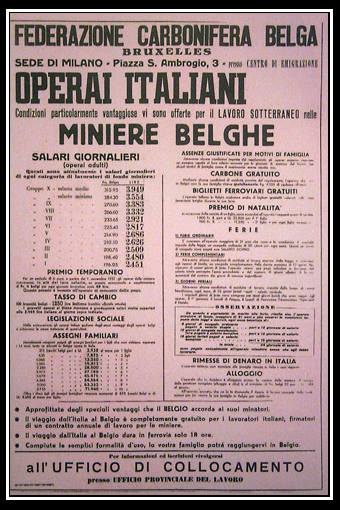 The plane leaves the soil and I realize I am a bit afraid, just a bit more than when I usually look at the calendar as I notice how many things are coming to an end and how many are going to start.

I am happy to get back, I don’t know how much, I don’t know for how long It will be. Looking at the Belgian greyness I cannot help thinking what I could have been if I was born fifty years before my actual birth. Next to South Charleroi railway station there is a factory, I think a steelworks. On a side of this huge enormous building, there is an inscription: THY-MARCINELLE. “Marcinelle” is a name that summons too many things to an Italian. The 8th August 1956, 61 years ago, in Marcinelle, in the Bois du Cazier mine, a human mistake in addition to minimal safety conditions triggered the breaking of an electric cable and the consequent outburst of blazes. Smoke overran tunnels of the whole mine and took the lives of 262 caged underground miners. For the most part Italians, 136, but also Belgians, Greeks, Spanish and many other for a total of 12 nationalities.

You read the name, and a lot of things come up to your mind, slowly and silently, if you close your eyes you can see them.

You perceive the sweat of miners, their drops for fatigue, the dirt on their hands and faces that never goes away, not even with the shower I can have today, and they couldn’t allow themselves to have. You can see them, getting back in those houses that not even time succeeds in making less anonymous. You can listen to the questions they used to ask themselves and the doubts they used to hide from their families that followed them in this unknown place, “Is it really worth it?” they used to wonder in front of a poor dinner. You read the promises of those pink posters illustrating Belgian mine as a safe and easy gateway from hunger; expectations disappeared immediately once these immigrants were given barracks to live in, those same barracks that some years before were used as Nazi concentration camp for Russian prisoners. You feel their fear of being taken to the Petit-Chateau[1], the prison where you were sent to if you didn’t want to go working in the mine. You feel the bitterness of their feelings when realising they had been swindled sold by their own State in exchange of a discount on coal supply.[2]

You can hear the thoughts towards those villages made of churches and fields in the Italian countryside, you can hear those coming from those churches and fields. Waits for letters, for news, for a hoped better future that became disillusioned in most of the cases, dramatically interrupted by tragedies in some others. Hopes of saving some money from work in the mines with the aim of going back home, in Italy, the only place they could ever call “home”. They dreamt, once back, of building something, maybe just a house with a garden in which to let their children play.

And today? What is left?

What remains is that the situation, mutata mutandis, are not too much changed from a certain point of view. Sure, we are talking of one of the most developed countries in the wealthier side of the world. Still, there are abandoned lands, especially in the South from which youth escape like one century ago. Potentialities are suffocated by the ancient belief that is impossible to create and build something good and successful due to hardships and length of our bureaucratic system, by our corruptions, by our bad luck like earthquakes and floods that do not forgive our negligence and remind us how much we are unable to fight the eternal human war against nature.

What is changed, and we cannot allow ourselves to forget, is the awareness of sweat and pain of those who, young as we are now, went abroad far from home in this grey place, as we go now, to work and escape from hunger, as we are not forced to do anymore.

What are we asked for then? What are we called to? We are asked to raise our head, to pay to them that future they dreamt of for themselves, for their sons and for the sons of their sons, for us. We have the obligation to go honouring their graves and tell them “yes, it was worth it”. Not for the supply of carbon for they have been sent under a soil that did not belong to them in any way, but for the chances we are given today by their sacrifice of yesterday. Today we are here, on this soil, for studying and developing, not anymore guests in others’ house asking for dignity, but constructors of the world, our own private one and others’ one too.

Finally, we have the opportunity to set the rules of our future. We owe this to those miners: we have to make it more brilliant than they used to dream.

[1] The Petit-Chateau was the prison where miners refusing to go working underground were taken to. The contract, in fact, consisted in 5 years of work with the obligation to complete at least one. If the worker refused to work, he was sent to this prison. It happened in many cases just a few after the arrival, these workers in fact were sent working in the mine without any training and many were afraid of this.

[2] The “battle for coal”: the worker-carbon exchange agreement signed by the Belgian Prime Minister Van Hoecker and the Italian one De Gasperi. The first was interested in solving the lack of workers in Belgian mines, the second was interested in reducing the weight of unemployment and granting a discount on the supply of carbon. The II World War strongly damaged Italy and in the post-war, misery and hunger affected the whole country.

Inflation has not been a concern for quite a while. Still, 2021 has been the year of economic recovery after the pandemic. Is it coming back? END_OF_DOCUMENT_TOKEN_TO_BE_REPLACED

The Homeland of Itzurza is a novel exploring the journey of four women stuck between the past and the future in post-Franco Spain. END_OF_DOCUMENT_TOKEN_TO_BE_REPLACED