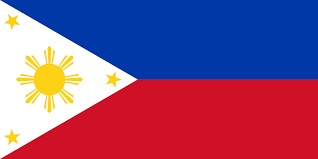 It’s 5:30 AM and I have about fifteen minutes to get myself out the door. My Czech student visa was expiring, and I had to leave France to have its validity extended. However, since Covid has made it so that inter-city connections in France are few and far between, I had to catch the 6:30 AM train from Grenoble to Lyon so that I could get on my flight to Frankfurt at 6:10 PM. Buses were no better, as they quit operating on the weekends- full stop. From Frankfurt, I would then fly to Vienna to catch the train that gets me to Brno, Czech Republic, where my home university is.

It’s all needlessly complicated because two weeks before my initially scheduled flight to the Czech Republic, new rules came into place stating that people coming from France had to isolate on arrival. I had to reschedule everything to factor in this mandatory isolation period before my appointment with the Foreign Ministry. And so, what would have normally taken 2 hours by plane, was now a hastily planned 30-hour journey. Halfway through my Erasmus semester in France, I found myself needing to go back to the Czech Republic to claim an extension to the visa that allowed me to stay in Europe. Halfway through being uprooted from a newfound home, I am uprooted once more. As a third-country national, this is what Erasmus is like.

Even if it is just for a semester, the disorientation that happens is very real. From collecting all the documents, the insurances, and the permits, preparing for Erasmus and getting settled in a new city is complicated enough as it is. Factor in the covid restrictions of where you’re coming from and where you’re going, plus the intricacies that come with being a non-European trying to exercise your rights as a European student, you’ll find yourself stuck with some 20 tabs open on your browser figuring out which documents to have and where to present them. This unprecedented overlap of circumstances has imbued me with a certain numbness to the fast-changing regulations, and the ability to absorb information the amount of which is not unlike trying to drink from a firehose.

I arrive at the airport by 7:20, just about an hour before the Covid testing site opens up. I realize that in my hurry, I threw away the food I have prepared the night before along with the trash earlier in the day. I was hungry, tired, and 10 hours away from being anywhere close to starting this trip. I fall in line for testing and knew I had to get tested twice: An antigen test with quick results that would let me get on my flight to Frankfurt that day, and a Czech-mandated PCR test for when I cross the border from Vienna on the day after that. 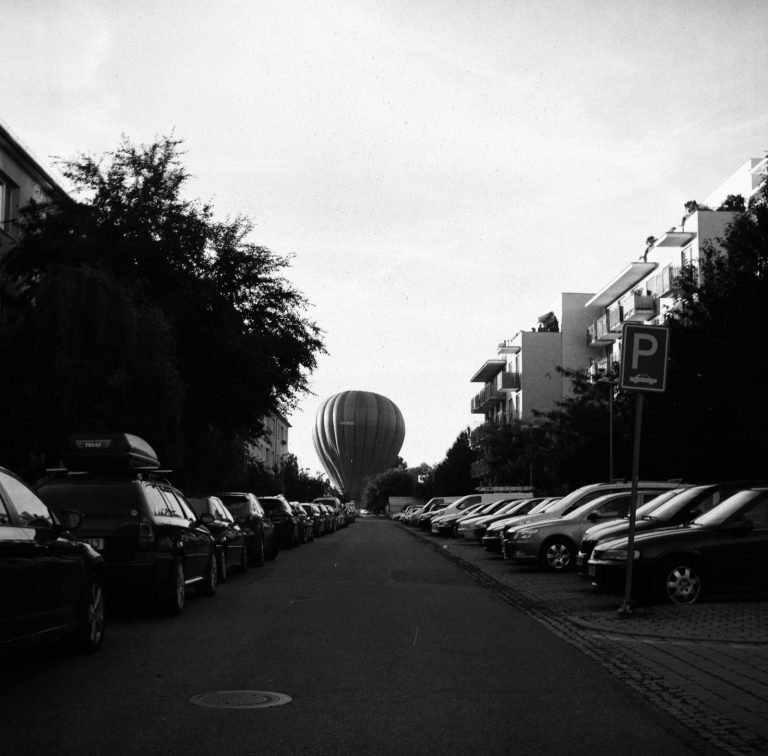 After I got my results, I proceed to the gate where my flight was boarding and came up to the border control booth. I present my passport and my test results. The agent hands me back the results, opens my passport, and asks me why I’m in France. I tell him I’m here to study. He matter-of-factly tells me no I was not as my visa was clearly Czech. As this happens, it does not get lost on me that he’s asking me these questions in French, and I respond in English. I explain to him that I’m on Erasmus. It took a few times, and a brave attempt on my part to pronounce ‘Erasmus’ in the most French accent I could muster before he understood. Just as soon as I thought I was in the clear, he shows me the front side of my passport and asks me how I could possibly be on Erasmus if I was not from Europe. I think about all the other third-country nationals who have gone to Erasmus before me and wonder if this was a shared experience between all of us. Do we count ourselves lucky if we do not get stopped and asked? Or do we all fall between the cracks?

I did not get to the airport half a day early just to get sent home. Coming from the Philippines, I was painfully well-versed in inane bureaucracy. The Erasmus experience as a third-country national is no different. You prepare more, even if more is not asked from you, because you never feel comfortable declaring your right to stay in and move around Europe. You print out documents when all your EU contemporaries have nothing but their phone with them. Thirty minutes, two additional personnel, a load of printed paperwork, and several calls to a superior later, they let me through. Needlessly complex and comically cumbersome, I smile as I find myself thrown headfirst into an absurd Kafkaesque situation.

Finally being on the other side of border control gave me some time to think about what just happened. I think further about Kafka. Specifically, his work Metamorphosis and how it would play out if it were written today. In 2021, should Gregor Samsa once again wake up from uneasy dreams to find himself transformed in his bed into a gigantic insect, will he have noticed? With the longevity of the pandemic beating us down to submission, will he have cared? Halfway through my mandatory isolation, I would have been glad to have randomly sprouted extra legs and feet. All the more to feel with, I suppose. Plus, it probably would have helped with all the anxious walking around as well. More realistically, he would have kept on this existential slog: going on Zoom calls with his microphone muted and his camera turned off, his colleagues being none the wiser. The absurd is contextual it would seem.

I got on the flight and landed in Frankfurt where I would end up attending a virtual meeting and taking two final exams during my nearly-15-hour layover. From there, I flew to Vienna and arrived at an airport with no border control. The absurdity of being compelled to get tested twice for Covid on the same day and never need to present the results is infuriating and anxiety-inducing. I could think of no definition more accurate than Kierkegaard’s contention of anxiety as the “dizziness of freedom”[1]. Having been told to present your negative test results to authorities on arrival, and not having any authorities to present them to, quickly forces in you a level of self-policing only people who have been in that situation can relate to. This dizziness went with me as I crossed the border to Brno where again, I arrive with zero stops from any authority.

Coming back to the city of Brno, I feel like a stranger in the place I’ve called home for two years. Having only been gone for three months, I feel weird calling myself a foreigner. Even weirder was remembering that I am a foreigner. A third-country national afforded the same opportunity as European students. Lucky to have taken part in this semester exchange at all. See, notions of home and identity are challenged when we go on Erasmus. Inevitably, wherever you go becomes a part of you somehow. We figure ourselves out relative to where we are. Therein lies the situation: Erasmus is an exercise in existentialist thought. A conversation between yourself and society about what makes you, you: the values you uphold, and the type of good you want to push for.

So, when asked about what the Erasmus experience is, how should one respond? Should it be an answer based on classes taken and credits gained? On relationships formed and relationships ruined? In defining the essence of a thing, Husserl tells us to consider what is both necessary and invariable to its being[2]. The program has very specific definitions that outline your participation in it but does not presuppose what you gain aside from the grades you’re supposed to take with you. And so, while there is the definition, there is no meaning. At least, no pre-determined meaning, that is. What is necessary and invariable to your Erasmus experience is your involvement in it. It, like life, is what you make of it. 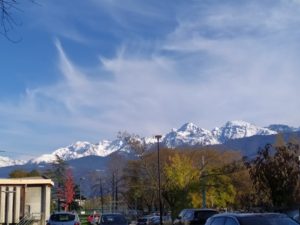 My name is Martina and I am one of Europe’s daughters. My mother was born not so many years ago, even though her name – linked to Greek mythology – 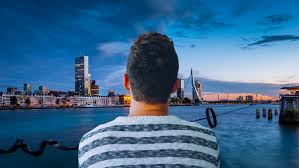 The unbearable lightness of Erasmus

Is the Erasmus light or heavy? “Over the town,” Marc Chagall, Tretyakov Gallery, Moscow The title of this brief piece that I am about to write is inspired by the masterpiece

For me, Erasmus was a chance to stare into the abyss- the uncertainty of what’s to come. The chance to pit all the values I’ve formed over time, against integration and globalization made manifest. More than a gloomy prognosis, the absence of meaning is an invitation: For an undoubtedly great opportunity for personal growth. A chapter to look back on, hopefully, to say that it has made us more resolute in our attempt to be good for the world and for the people around us. An opportunity to live authentically, in the existentialist sense. To accept the weight of understanding that your experience will be the conglomeration of how you practiced this freedom which the Erasmus program has afforded to you. We come to university ready to learn and to put our beliefs to the test. Erasmus takes that premise and magnifies it.

A month later, having secured my residence permit, I finally get on my flight back to France where I will spend the remainder of my semester. This trip a lot less finicky than the previous one. I come back to my room- my body tired, and my head still dizzy at the freedom I find myself in. I try to find my bearings and I press however many feet I have, on the floor.

The Erasmus experience will hand you an unprecedented amount of accountability. Your experience is what you will it to be, and in turn, it will be uniquely yours. As Camus writes: “We are all exceptional cases”[3]; our Erasmus gives us the reins to make our cases exceptional.

[1] The Concept of Anxiety –  Søren Kierkegaard